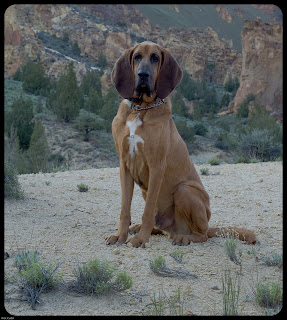 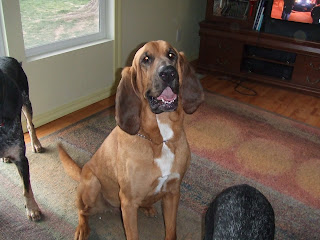 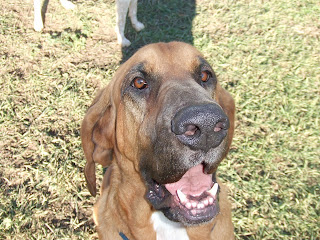 We lost our beloved Jack to bloat last night. Rick and I headed out camping with the other hounds and the pointy eared one, Ziva. Jack stayed home. Saturday a friend came and took him to stay at her house. He got to romp and play and be as spoiled as he is here. Unfortunately, by late evening, it was evident he was in great distress and we got the call they were taking him to West Vet. Jack had some recent problems and I was a bit worried about his health and because of that I had spent some extra time snuggling with him in front of the tv last week (I am so glad!). Once at West Vet, they took xrays and Jack's stomach had twisted. Torsion. Ugh. We knew what that meant. Because of Jack's age and health we had talked that putting him through a risky expensive surgery would not be in his best interest. What was heart breaking is we could not get home in time to hold him. Our friends were there and held onto Jack as he peacefully passed away. We did rush home and were lucky enough to see him about an hour or so later and say our good-byes even though he was already gone.
Jack was a lot of dog and will be greatly missed. A gentle soul, yet a handful of hound that sometimes had an attitude. He was an absolute kick in the pants!!! We are so glad he finished out his final years with us. Godspeed Jack! We love you!!!! The best bloodhound ever--our big brown!!
PS: We were so happy to find out that Friday night the person taking care of Jack and the cats, didn't leave him at home, but took him to her house where he not only charmed his way onto her sofa and partially on her lap, but on her bed! He got to romp, charm and be Jack. He was excited to come home Saturday morning to get fed and get his chewy. Later he was picked up to do more romping. So we are happy that his last weekend here, even though we left him at home, was a fun adventuresome time. He deserved that and more. :) Miss you Big Brown JackJack!
Posted by Paula McCollum & the Blueticks at 3:43 PM 4 comments: